Popcorn Lung – What is it and Can You Get it Using Ecigarettes?

Why Did Popcorn Lung Suddenly Become So Popular? 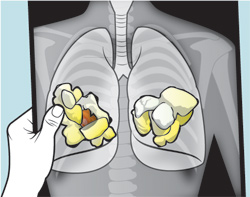 Over the past year, stories with sensational (and disturbing) headlines have emerged regarding a link between vaping and a chronic disease called “popcorn lung” which causes coughing and wheezing. Many people still continue to smoke because they are fearful of getting this medical condition if they start vaping.

Until 2015 popcorn lung, was relatively unknown. So what happened?

A Disease By Any Other Name is More Interesting

Popcorn lung was first reported in the year 2000 when several popcorn factory workers (8 to be exact) developed lung problems due to shop conditions involving the artificial food flavoring, diacetyl which is used in the butter flavorings.

How Did Popcorn Lung Become Linked with Ecigs and Vaping?

The public first learned of Popcorn Lung when a Harvard study on flavoring chemicals in sweet flavored e-cigarettes was picked up by the media. Diacetyl was found in 39 of 51 flavors tested and the study concluded that, “due to the associations between diacetyl, bronchiolitis obliterans and other severe respiratory diseases observed in workers, urgent action is recommended to further evaluate this potentially widespread exposure via flavored e-cigarettes.”

The Cause for Alarm

Not only was the story timely, the new name for the disease, “popcorn lung” made for compelling headlines.

Although diacetyl is currently approved by the Food and Drug Administration as a safe flavor ingredient, the study indicated evidence to suggest that inhalation of large amounts can be dangerous.

The overblown general assumption that “ecigs were dangerous” was reported by the news media despite the fact that only minute levels of diacetyl were found in a handful of ecig brand flavorings.

The fact is, popcorn lung is a very rare disease and there have been zero established cases from vaping.

Of course there are 1.6 million deaths per year, with an estimated 80% coming from smoking.

Response From the Scientific Community

Expert e-cigarette researchers including noted international scientist Dr. Konstantinos Farsalinos agreed that diacetyl should not be used as a flavor ingredient in ecigarettes; however, he strongly criticized the study for exaggerating the potential risk from diacetyl exposure through e-cigarettes.

According to Farsalinos, the levels of dangerous compounds found in the products studied “are absolutely minimal”.

What was cited as being most disgraceful was that nowhere in the report did the research authors mention that tobacco smoke contains far higher levels of diacetyl in addition to other harmful ingredients.

Can You Get Popcorn Lung if You are a Heavy Vaper?

Here are the facts:

Where Can You Buy Diacetyl-Free E-Liquids?

Since the popcorn lung scare, responsible e-cigarette and e-liquid manufacturers have either removed flavors containing diacetyl from their product line, or they have reformulated their eliquids.

Our team of reviewers reached out to some of the most popular e-liquid companies including best sellers listed below; all of whom confirmed that their e-liquids were now diacetyl free.