Ghastly Gifts of Christmas Past

Take Off Your Gas Masks, Secondhand Vapor is Safe to Breathe 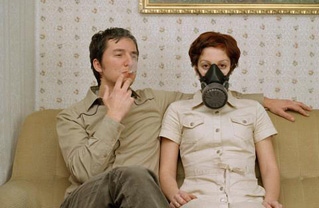 Several new studies of electronic cigarette vapor and its effect on indoor air quality produced some surprising results that may change the way legislators think (and vote) regarding proposals to ban indoor e-cigarettes.

In September, 2015 a study performed by performed by the Spanish Council of Scientific Research and reported by prominent scientist Dr. Konstantinos E. Farsalinos proved e-cigarette aerosol (or exhaled vapor) contained fewer volatile compounds than normal exhaled breath. The study strongly suggests that inhaling nicotine vapor could be as safe as breathing air.

The study, reported by the National Institutes of Health, a peer-review journal focused on the evaluation of health risks associated with airborne chemicals.

In the study’s risk analysis, all vapor samples of e-cigarette emissions (the vapor produced from heated liquids) revealed to be of “No Significant Risk” to human health.

A separate test was performed on tobacco cigarette smoke.

The test results comparing the concentrations of pollutants between the two products produced two very different results in measuring the health risks of each.

In yet another study from the Roswell Park Cancer Institute (RPCI) in Buffalo, New York, results showed that e-cigarettes emitted 10 times less nicotine than traditional cigarettes and did not produce any substantial amount of carbon monoxide and toxic volatile organic compounds.

Perhaps the most famous study on second-hand vapor, known as the Drexel University Study is clearly reviewed by Dr. Michael Seigel, Professor in the Department of Community Health Sciences, Boston University School of Public Health who spent two years working at the Office on Smoking and Health at CDC, where he conducted research on secondhand smoke and cigarette advertising. Here is the link to Dr. Seigel's review.

We at E-Cigarette News think it is most enlightening that the e-cigarette vapor tested to be of “no significant health risk” at all to humans; both children and adults.

Tobacco cigarettes, while still enjoyed by millions of smokers have been banned from public venues because secondhand smoke has been proven to be harmful to humans. What good reason can legislators support to ban e-cigarettes from public venues based on these new test results? I might add that there is really no such thing as “fresh air” unless you're standing on top of a mountain. We are constantly exposed to auto fumes, dust mites, dander and mold spores (to mention only a few common airborne contaminants).

Regarding the Safety of E-Cigarettes

Positive scientific studies conducted by unbiased scientists will continue to be presented to the FDA and the public.

While the world acknowledges that there are few, if not zero pharmaceuticals that are “completely safe” to ingest, it's unfortunate that too many smokers still fear e-cigarettes–a product that is now recognized by many health professionals as being a far safer alternative to smoking tobacco cigarettes.

According to the Mitch Zeller, director of the Food and Drug Administration's Center for Tobacco Products,

“We’ve been given an opportunity to make a serious dent in the death and disease toll, now that we can regulate these,” Zeller said. “Let’s not lose our focus on what the primary cause is for those 480,000 avoidable deaths each year—it’s primarily burning, combusting cigarettes.”