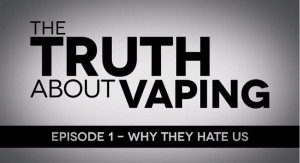 The Truth About Vaping – Why They Hate Us

We were blown away by this video from Not Blowing Smoke which reveals  the financial relationship between state governments and Big Tobacco, and exposes the ugly truth behind anti-e-cigarette campaigns orchestrated in California, New York and other major political venues.

Vaping is only a hazard to Public Health Funding

For more information about the science and facts about electronic cigarettes visit  NotBlowingSmoke.org

Wondering why nicotine gets such bad press? Check out the second mind-blowing video from NotBlowingSmoke.org.