E-Cigarettes Ads and Cartoons – An Editorial
As a proponent of tobacco harm reduction, I am among a growing number of e-cigarette supporters who believe that the benefits of electronic cigarettes far exceed the fear that they may one day prove to have unhealthful side effects; or that children may find them irresistible.

One particular complaint by opponents regarding the marketing of electronic cigarettes puzzles me. They continue to claim that e-cigarette advertisers use cartoons to sell the products to children.

This is one accusation I dare to challenge without performing any scientifically controlled experiments.

Halo electronic cigarettes (pictured above), uses an expressive flame as a logo. Is the flame a cartoon? Who's to judge? I believe there will always be a fine line between artistic illustration and cartoon. At least my humble opinion is drawn from experience. (pun intended)

I was the director of on-air promotion for Cartoon Network when it first launched way back in 1992. Cartoon Network succeeded brilliantly because its target audience included not only children, but adults and that’s how we approached our advertising.

Studies now confirm that adults enjoy cartoons and that they can be a good advertising vehicle.

Tony the Tiger and Cap'n Crunch are American icons that still adorn sugar laden cereal boxes. The colorful image of Ronald MacDonald teaches every child in the world that fast food is the key to happiness. Unfortunately it's also the key to obesity and diabetes.

It troubles me when I hear people accusing e-cigarette advertisers of using cartoons to sell a product that has yet to be proven “unhealthy”. I take offense; not only as a promoter of e-cigarettes, but as a toon lover.

As e-cigarettes (and the dangers of nicotine) continue to stir up a whirlwind of debate, it's good news that recent scientific tests are showing electronic cigarettes and nicotine are not as dangerous as regulators would like us think. 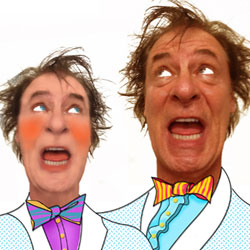 E-Cigarette News has no problem reviewing (and promoting) electronic cigarette products that use a cartoon character as a logo or spokesperson. Halo Cigs‘ Johnny Blaze is just one example. So is our very own Chucky Chester, the Vaper Taster Tester – although he's a hybrid cartoon.

Like the Cartoon Network which defied conventional wisdom by launching a 24 hour all cartoon channel, our Chucky is there to attract an adult audience to a smoking alternative that may one day prove to be far less dangerous than a box of Frosted Flakes.