The Mystery of the Mona Lisa Uncovered

Although this remarkable product’s patent is still being challenged, it hasn’t dampened Mme. Cheville’s entrepreneurial spirit. Chausette has now uncovered facts about her own remarkable lineage, linking it to one of the worlds most famous works of art.

Here’s how she told it to me just a fortnight ago.

Mme Cheville, was sweeping the old Galouses butts out of her attic in Paris when she stopped to have a cigarette break and noticed a large painting in the corner of the attic wrapped in old editions of La Monde. Memories flooded her enterprising mind as she approached the familiar relic and peeled back the moldy newspaper with her badly nicotine stained fingers.

There it was. The portrait of her 13th Great Grandmother, Chausette La Jaconde. She immediately stubbed out her cigarette on the attic floor and raced to her computer, eager to contact E-Cigarette News to relay this remarkable story.

“The painting has been in my family’s possession for centuries, and now I feel it is time for the world to see the original in all it's splendor and to hear the beautiful story behind its creation.” 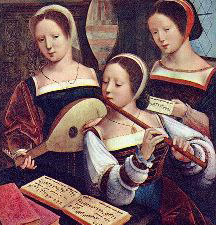 I soon learned that in 1503 Chaussette La Joconde had gone to meet some of her co-workers from the Renaissance Sock Factory in downtown Florence to grab a quick martini or two when she spotted Leonardo da Vinci at the end of the bar sipping a Limoncello.

She had seen Leonardo in Molly Maggiano's many times. He was known for hanging out with artsy intellectuals and shouting above the raucous tones of popular recording artists such the Rigatoni Sisters, while discussing mankind’s place in creation, football scores and the continuum universe.

On this particular evening, he was in a more cerebral mood, carefully demonstrating to his mates his latest invention – the e-cigarette charger; a remarkable device that could charge up to six e-cigarettes at a time. His already popular electronic cigarette (fueled by lard and natural energy) was already selling like hot tarts. 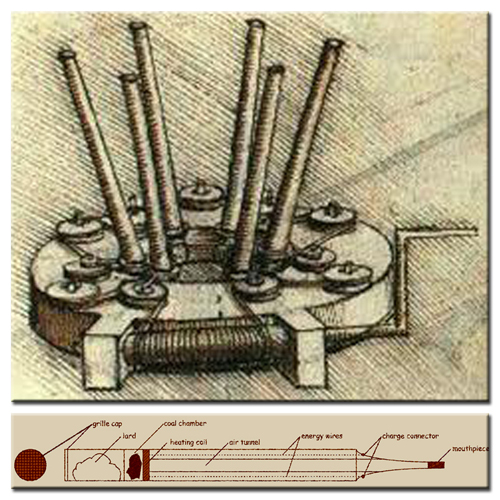 Leonardo Da Vinci's invention of the electronic cigarette and charger

Being a habitual chain smoker, Chaussette was interest in anything about cigarettes, so she thought she’d steal a closer look at Leonardo’s contraption on her way to the gabinetto.  She had drunk more than her fare share of vodka and needed to relieve herself before getting a cab home.. (or pack mule if one was available).

As she passed the boys, grinning coyly, Leonardo spotted her out of the corner of his eye. He was strangely electrified. So much so, that he spun around swiftly with outstretched arms not unlike a helicopter, uppercutting Chaussette on the chin. The poor girl flew into the air and landed face down on the bar into a plate of fish and chips. With a chip up either nostril and ketchup smeared across her face she looked up with a bewildered smile.

“So sorry Signorina…I mean Madamoiselle! I do beg your pardon.” The great artist, who was also greatly embarrassed, delicately retrieved Chaussette’s spectacles which had flown to the floor.

“It’s just that your face,..that smile! You must come to my studio tomorrow!”

Chaussette pulled a soggy chip from her nose and took Leonardo’s helping hand. “But of course”, she said willingly, and smiled again.

The rest is (almost) history. 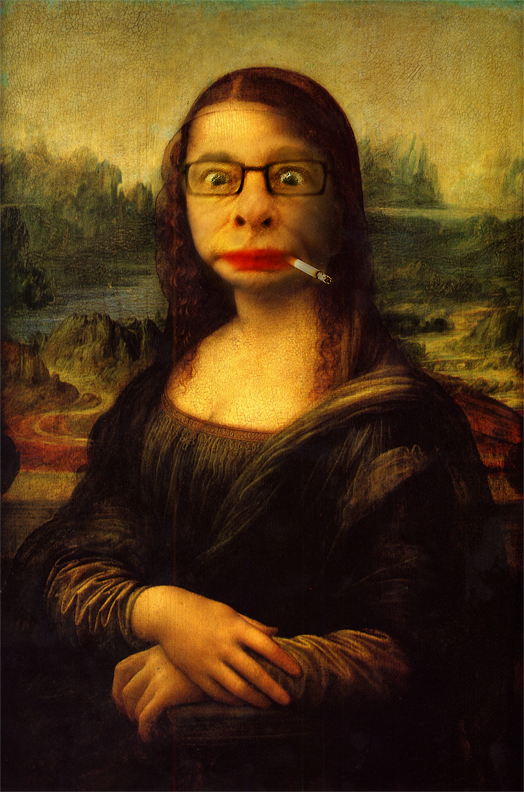