ECigarettes in the News

New E-Liquids from Vaporfi – Pre-Steeped and With High VG

[important]Update! This Line of E-Liquids is Now Called GRND RSRV[/important] 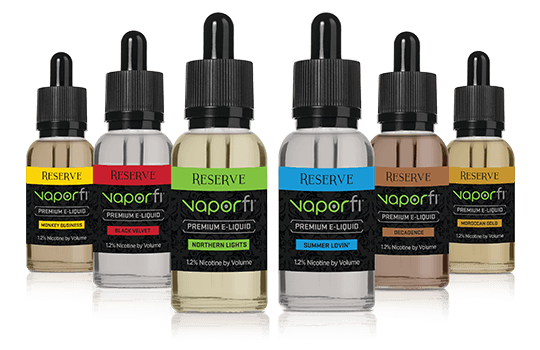 One of my preferred e-liquid companies, VaporFi (formerly VaporZone) has introduced their Reserve Collection of e-liquids which I was fortunate to test right after they went on the market. When I tested it, the collection was called the Artisan Collection, but VaporFi decided to change the name to Reserve after a few weeks.

I was pleasantly surprised with the flavors, and there was more vapor, although I did prefer some over others. Taste preferences will always come into play, but from those I tested, the results were satisfying with awesome vapor and none of that unpleasant chemical or overly fragrant aftertaste.

I used my awesome new VOX hi-powered vaporizer. I also made sure the tank was clean with no lingering flavors from previous use.

The Reserve Collection packaging is childproof. Actually, it’s almost adult proof with a serious press-down twist lid. VaporFi continues to stay a step ahead of deeming FDA regulations when it comes to ecig and eliquid safety.

I also liked the fact that the bottles and drippers are made of glass, not plastic. Drippers are so much easier to use than a plastic squeeze bottle which can be tough on the finger joints (like mine:)

Best All Around Features of the Artisan E-Liquids

The two big improvements are the high VG or Vegetable Glycerin level (60%) and the fact that the juice is pre-steeped. The higher VG means greater vapor production and a more comfortable vape for those sensitive to Propylene Glycol – the other USP ingredient in e-liquids. Pre-steeped e-liquids have time to develop a fuller richer flavor, just like when you steep tea or age wine.

I didn’t get to taste the entire Reserve Collection lineup, but after sampling a few, I’m eager to try them all.

I’m a fruit lover so I was happy to test out Monkey Business – a custardy banana flavor. Custard is a tricky flavor these days because e-liquid companies have to keep it natural. Artificial custards may taste sweet but there’s been a lot of finger pointing regarding the dubious nature of those types of artificial flavors. VaporFi does it right with Monkey Business and lives up to it’s Diacetyle free promise. The banana flavor is subtle, which for my taste, is preferable.

Northern Lights was the next flavor tested.  This is a great vape right from the start. It’s minty, then melony as in watermelon or cantaloupe. Very refreshing for the summer season, Northern Lights is easily an all day vape for me. 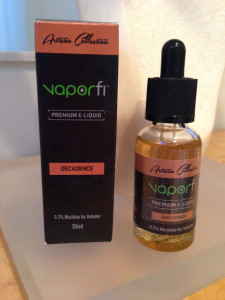 I also tested Summer Lovin’ which is more raspberry and lemon, sort of a pink lemonade. I do prefer Northern Lights, but I can see it becoming a favorite for the season for those who like a bit of tartness to their fruity vape.

Other Artesian flavors include:

Decadence – A subtle blend of chocolate and hazelnut

Black Velvet -Described as a cherry cola.. (I really have to try this one!)

From those I tested, I rate the new Reserve Collection flavors highly. They are not the cheapest e-liquids on the market for a 30ml bottle, but my taste buds are worth it and I prefer to buy my e-juice from companies that do third party testing for purity and are dedicated to constantly improving their product line.

Check out all the VaporFi e-liquid flavors on their website.