The Best Memorial Day Sales for Ecigs and ELiquids

Vapor Couture E-Cigs Have Been Discontinued 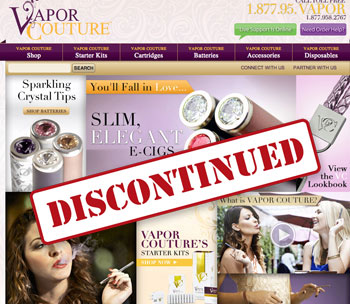 In a bold move, e-cigarette company, VMR, has decided to discontinue it’s once popular Vapor Couture line of ecigs.

Vapor Couture known for it’s elegant, ultra  slim styling was the first e-cigarette designed for women. The stylish, long “cig-alike” was first introduced in 2011 and according to parent company VMR, it has always been a strong seller. But the ecig industry is swiftly evolving and companies are having to make difficult decisions.

According to VMR company representatives,

Today, vapers are seeking a level of power and vapor production that the slim VC design is incapable of producing. For this reason, we regret to inform you that we are discontinuing the Vapor Couture brand.

Although many customers will be disappointed, VMR’s future in this highly competitive ecig market must take precedence. Today it’s all about power, vapor production and full flavor.

If you’re a current Vapor Couture customer, don’t expect to get an email telling you your lovely ecig model is now obsolete.