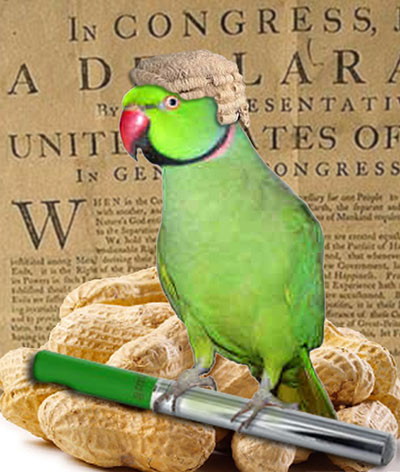 Percy the E-Cigarette News' celebrity ecig psychic sits poised on his PremiumVapes e-cigarette. This month, our savvy little seer is offering his predictions for the (hopefully) imminent e-cigarette regulations.

We can assure you that he hasn’t had a privileged view of the recently released research publication “The forecast of the US electronic cigarette industry” as it costs about $3,599 and Percy gets peanuts as a salary.

1– In the United States, the FDA will (finally) set fair regulations based on scientific testing conducted by real scientists, not by “regulatory” testing funded by special interest groups. Having once felt the wrath of the US Judicial System, The FDA will choose justice over corrupt political injustice.

2– Vapers will be happily shopping online in their pajamas since On-line e-cigs sales will continue to flourish; however, smaller ecig and e-liquid companies will bite the dust due to the high cost of the new FDA approvals process. Most on-line companies will only carry only vaporizer, eGo and MOD style e-cigarettes, phasing out the “cig-alikes”. Seems they are not as affective in satisfying former smokers. Vapers who prefer the ease that comes with a traditional 1st generation cig-alike will have to settle for inferior drug store brands.

3– New directives on e-cigarette safety and quality requirements will be in full force. Many e-cigarette companies such as Vaporfi, and other reputable e-cig companies already meet those safety standards; but they, along with all products (including e-liquids), will have your government’s stamp of approval on the box plus little warning pamphlets you’ll probably throw away before you read them.

E-Cigarettes will be sold only to adults, drinking age and older.

4– E-Cigarette advertising will prevail but don’t expect to see Tony the Tiger vaping a pink ecig.

6– Electronic cigarettes will not be considered medicines, but not because they taste good. It’s because the world doesn’t need another black market.  E-cig vendors will breathe a sigh of relief knowing that you will not need a doctor's prescription to buy vaping prouducts.

7– Nicotine levels in cartridges, cartomizers and e-liquids will be restricted to the ridiculous level of 20 mg/ml. (That means 20 milligrams per millilitre of propylene glycol). Dr. Konstantinos E. Farsalinos will present several more peer journal reviews denouncing the ruling and will become even more revered by vapers worldwide. Prices on e-cig cartridges and Cartomizers will soar, as manufacturers have to toss all those 24mg/ml and 34mg/ml carts replacing them with 20mg/ml carts (which are rare). An underground market for all higher levels of nicotine e-juice will flourish. Vapers who were heavy smokers will return to smoking their Marlboro Reds.

8– The days of legal home basement e-cigarette operations are over. Cheaply made e-cigarettes will still make it to the US and Europe, but if they don’t get the Good Vaping Seal of Approval from the west, vendors won’t buy them.

9– US Politicians and Health Ministers across Europe who previously spoke out vehemently against e-cigarettes because they refused to read the true scientific tests showing e-cigs were no more dangerous than a cup of coffee, will lose the next election. Many of them will begin vaping for no good reason except to regain voter confidence.

Percy is the youngest of E-Cigarette News' contributing authors. At the tender age of 8 he already has a vocabulary of over 7,000 words. Percy is also an accomplished astrologer and clairvoyant. He enjoys star-gazing, eating peanuts and playing with his bell.