I Don’t Care If E-Cigarettes Are Good or Bad 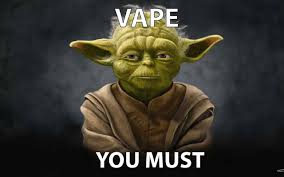 E-cigarettes cannot be advertised as a smoking cessation device. If that ever changes, it would be a major medical breakthrough, but for now, the joy of vaping is still good reason to celebrate.

Happy From the Start

I didn’t take up e-cigarettes for the usual reasons. I started vaping because my wife tried ecigs and I thought they were pretty amazing. Vaping all those richly flavored e-juices sounded quite pleasurable.

I’m sure just about everyone on the board of Campaign for Tobacco Free Kids would be horrified by my statement, but sorry, ecigs are for grownups and I’m an adult who still has functioning taste buds. I happen to like the taste of vanilla and mountain clove Cartomizers and I enjoy custard e-liquid vapor as much as I like cream cakes topped with marzipan.

It’s that kind of errant adult behavior that gets the anti ecig groups salivating. The fact that vaping relaxes me in much the same way as a real cigarette only adds to their disapproval. No one should have that much fun using a product that has the word “cigarette” in its name.

Vaping also satisfies that programmed behavior of needing to do something with my hands while I'm on the phone or after I finish a meal.

I admit, I have an oral fixation that’s frowned upon just as much as smoking e-cigarettes for the sheer pleasure of it, but I don’t care about non-scientific ideologies that equate the inhalation of vapor with anti-social behavior. I’m enjoying vaping rather than smoking and I feel much better knowing I’m inhaling flavored water vapor instead of burning tobacco smoke. The sane call it Tobacco Harm Reduction.

I was more than pleased when Public Health England backed the industry with their report that vaping is about 95% safer than smoking. That's tremendously reassuring.

E-Cigarettes – Seeing Through the Smoke

E-Cigs are not as yet regulated by the FDA and their merits are still being hotly debated. Do I believe US studies that say they are “dangerous”? No, quite the opposite. I choose to side with respectable Science rather than fall for political fear-mongering and lies, obviously aimed at perpetuating the interests of the tobacco and pharmaceutical industries.

NotBlowingSmoke's video on California Politics – Why They Hate Vapers

I choose to focus on the positive. Aside from the pleasure of vaping at home, in my car and in many public places without worrying about the smell, ash or second-hand smoke, I enjoy something that satisfies my anti-social oral fixation without offending my family members and colleagues.  I also love the adventure of discovering innovative new ecig products and e-liquid flavors.

The best e-liquid companies offer several tobacco flavored e-juices, but I personally wanted to get away from the burning tobacco taste, so I vape non-traditional flavors. l

The End of E-Cigarettes – The Rise of Vaping

As one who has worked in advertising, I often wondered whether the ecig industry would have had an easier time convincing the anti-tobacco lobbyists of their products’ effectiveness if they had started calling e-cigarettes vaporizers from the start. Upon examination however, I believe there would have been far less attention paid to the product. I learned early on that when it comes to creating product awareness, there’s no such thing as bad publicity.

The Future of E-Cigarettes

Now that vaporizers and MODS are becoming popular (and to date they are outselling the first generation cig-alikes), I predict that the unsavory word cigarette will fade from our vaping vocabularies.

Will e-cigs ever be marketed as a socially acceptable recreational device the way cigarettes were back in the 40’s in 50’s? Who’s to say? The public seems to have no problem with advertisers who sell the hell out of fat filled, high carb Happy Meals and Coke, (which is also a great varnish remover).

E-cigarette companies will have to leave it up to government regulations and pro-active vapers who continue to support these innovative products.

In my opinion, e-cigarettes and vaporizers are more than just a way to avoid tobacco smoke, cigarette butts and ash; they satisfy my taste buds and oral fixation worlds better than any cigarette or Happy Meal. What do you think?